Contributing to only 2.3% of global deforestation, palm oil as a crop is not the biggest driver. In tropical areas, however, palm oil contributes to an estimated 5% of tropical deforestation. Much of the expansion of palm oil harvesting occurs on land that was previously used for growing crops like coffee or rubber. This is especially true in Latin America, Sumatra and peninsular Malaysia. Of the palm oil harvested from deforested land, not all forest was primary forest before clearing.

Many palm oil companies, including EPOA members, are committed to ‘no deforestation, no development on peatland an no exploitation (NDPE)’ palm oil. In Europe all palm oil imported since 2018 is covered by these NDPE commitments. We have even taken a clear political position: we welcome European regulatory measures. We have come a long way, but we also need the help from official governance to make 100% sustainable the norm. Read more about this in our position paper.

To implement their commitments companies and partner organisations are actively monitoring their supply chains. Since 2018, 99% of the palm oil entering Europe is traceable to oil mill. This information is used to identify risks and engage with suppliers on sustainability.

To stop sourcing from non-complying suppliers may sound like a solution, but often means a continuation of negative practices. Instead, NDPE committed companies always try to engage and solve issues with their suppliers. Controlling purchase based on improvements made can be a better incentive for suppliers to improve practices. When suppliers repeat non-compliant behaviour or appear unwilling to comply with NDPE policies, suspension is applied. 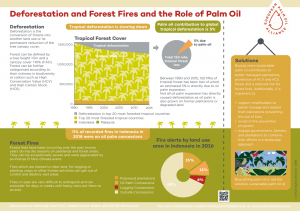